Join Friends of Shenandoah Mountain and Potomac Appalachian Trail Club – Southern Shenandoah Valley Chapter for a choice of three invigorating and scenic hikes on Shenandoah Mountain. Meet at the front gate on Saturday morning to catch a ride or to follow in your own vehicle. Bring water, a snack, appropriate clothing and shoes, rain gear and any personal items or first aid you might need.

Grooms Ridge Trail – 3.4 miles (challenging) Meet 8am
This is a tough but rewarding climb to a scenic point on Grooms Ridge Trail in the heart of the proposed Little River Wilderness (now making its way through Congress!). The trail climbs 1200′ in 1.7 miles to a panoramic overlook. The hike takes 1.5 hours to the top and another 1 hour to return with a 20-minute rest at the top. We will arrive back at Natural Chimneys Park by approximately 12:30PM. See the following link for more information:  https://www.friendsofshenandoahmountain.org/grooms-ridge-hike.html

North River Gorge Trail – 2 miles (easy). Meet at 9am
This easy 2 miles out and back hike is great for children and families. We will begin on the Wild Oak Trail before connecting with the North River Gorge Trail. North River Gorge is known for its scenic beauty, clean water, spring wildflowers, and its unique swinging bridge. The trail is fairly flat and wide and follows the river allowing for beautiful sounds throughout the hike and opportunities to get near the water. We will meet at the Natural Chimney Entrance Station at 9 AM and caravan to the Wild Oak Trailhead, returning by 11:30 AM.

Trimble Mountain Trail – 4 miles (moderate) Meet at 8am
This is a 4-mile loop trail that begins across the road from Todd Lake.  We will climb about 1,000’ in 2 miles reaching the first Trimble Mountain peak and then continue on to the second peak before descending to the starting point.  This hike is not too steep, but it will get your blood flowing.  We will hike through mature forest, cross a couple of small streams, and pass by a salamander pond.  The hike takes about 3 hours including a 20-minute break for water and a snack.  We should be back at Natural Chimneys by noon. 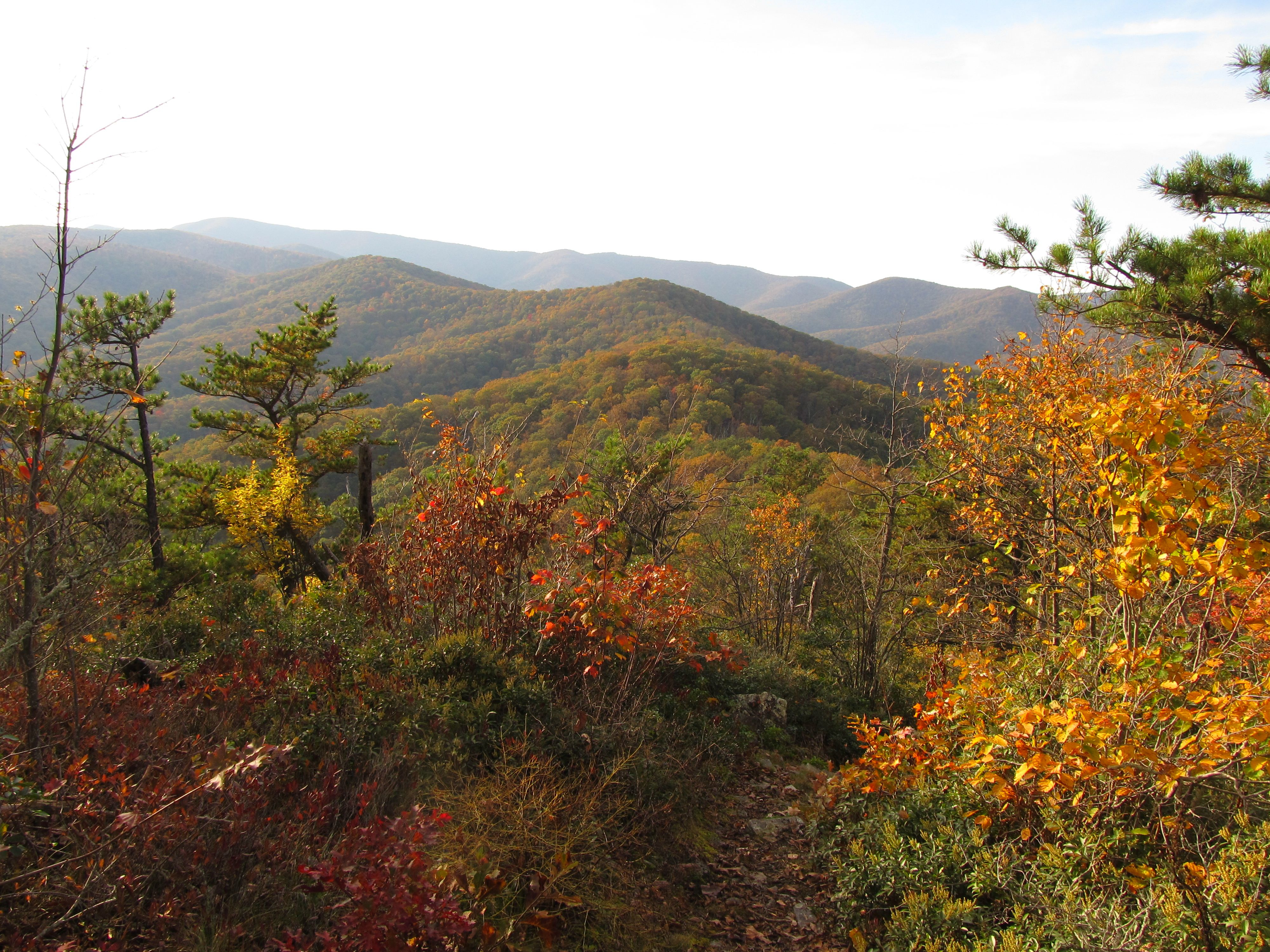 Situated near the North River Ranger District of George Washington and Jefferson National Forests, you’ll find the perfect trail for a day hike. A map of area recreational opportunities is available here. Augusta County is home to two wilderness areas, Ramsey’s Draft and St Mary’s, each offering some of the most beautiful trails and mountain streams in the Shenandoah Valley.

Natural Chimneys Park has 2.5 miles of hiking trails. Approximately one mile of this trail system is level and considered easy for walking. This trail meanders along the borders of the park, in and out of hardwood stands. The park borders the North River, giving the hiker a walk beside calm waters when the river is running. Unfortunately, the river retreats underground at times in the summer due to low levels. The remainder of the trails is on steep hills and ridges, and is of medium difficulty. There are overlooks giving a peek back down into the valley below and displaying the unimpeded western view from the ridge atop of the Natural Chimneys themselves.

Numerous wildflowers and wildlife is observable while using either trail. It is not uncommon to see a chipmunk or grey squirrel, or hear a songbird or an owl. White tail deer, wild turkey, and the occasional black bear have been sighted on the park. In fact, Natural Chimneys is included as an observation site for the Mountain Trail of the Virginia Birding & Wildlife Trail System. Natural Chimneys Park exhibits some of the incredible geology of western Virginia. Remnants of rock once carved by a shallow sea remind the visitor of the massive timeframes needed to create formations we see today. The open grassy areas around the chimney host open country species such as eastern kingbird, eastern bluebird, American robin, American goldfinch and chipping sparrow. The neighboring scrubby brush land and secondary forest support other familiar species such as eastern phoebe, eastern wood-pewee, Carolina chickadee, tufted titmouse, Carolina wren, blue jay, northern cardinal and eastern towhee. The North River runs through the property and, when rainfall keeps it flowing, it supports a variety of water birds including herons and waterfowl. Butterflies to look for around the park include eastern tiger and spicebush swallowtails, tawny emperor and pearl crescent.